Three processes which continue to use existing pipelines

R22 systems use mineral oil. Operated at a higher pressure, R410A air conditioning systems, on the other hand, require high-grade synthetic oils. As excess oil accumulates in pipelines and retains chlorine residues and humidity, this can lead to chemical reactions in synthetic oils, which will ultimately lead to compressor damage due to insufficient lubrication.

This is why until now pipelines also needed to be replaced – a somewhat costly process. With the Replace Technology, Mitsubishi Electric now offers the possibility to continue using the existing pipeline network.

For split systems with pipelines of up to 40 m, Mitsubishi Electric has developed a special synthetic refrigerant oil that - based on its nature - cannot form a chemical bond with existing mineral oil residues.

When using the patented HAB (hard alkyl benzene) oil, full lubricity is maintained even when mixed with mineral oil residues. Purging or other measures to clean the air conditioner are not necessary. The only thing required is the replacement of the old air conditioners with new M-Series units. 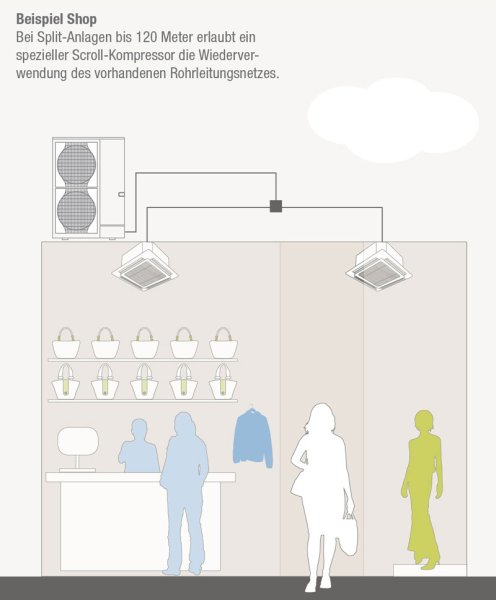 For larger air conditioning systems with pipeline lengths of up to 120 m, a type of system mostly used in commercial applications, Mitsubishi Electric has developed a new scroll compressor. The compressor‘s special coating makes it possible to re-use old R22 pipelines.

Degradation may occur during a compressor process which uses high hot gas temperatures as a result of impurities due to mineral oil residues. . The new compressor coating ensures that there is less friction heat. This prevents decomposition of old mineral oil and production of aggressive substances. All standard inverters, power inverters and Zubadan units are fitted with this new technology as standard.

On VRF systems with many branches and a large number of connected indoor units, oil residues may accumulate that are difficult to spot and eliminate. . In its City Multi series, Mitsubishi Electric therefore offers a model range with a guaranteed replace function that automatically purges the pipeline network. The R410A is conveyed through the system in a two-phase flow pattern during an automatically launched purging operation, which lasts a maximum of two hours. During the process, it picks up all mineral residues, which are then separated from the refrigerant by a flush filter in the outdoor unit. The pipe dimensions in the City Multi series have been matched to the standard pipe diameters used in R22 systems in the corresponding performance class.